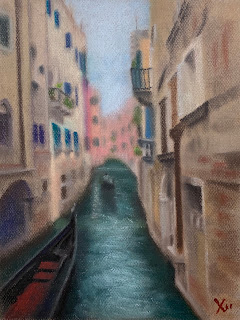 In summer 2016, I went for a trip in Europe. Italy was one of the countries I visited. I spent several days to do sightseeing in a few cities. Each city is unique. The most unforgettable city is the world famous Venice, a city with thousands of rivers and bridges.

It was a guided tour. The tour guide told us to follow him instead of going to the different paths on our own, because it was very easy to get lost once you enter. So I did not dare to explore the various paths. When the tour guide led us on this bridge, I found this dream like view.

The river separated the architectures into two sides. When I took a close look, I noticed the different levels of warm colours casted by the sunlight on the various parts of the buildings. Looking ahead, the pink buildings and jewel like green river merged and disappeared in the far end. That was absolutely attractive. If I were going alone rather than following the tour guide, I would jump onto that boat and row on the river. I would like to see wha was the wonder land over there.